*Stories are listed below by fandom and then by the main pairing in the story:

These icons were made for the

avland Challenge 02: Character Spotlight, in which they gave us a list of characters that we had to pick one from and make some fanwork for them. I picked Lady Sif and made some icons.

We had to make something for the characters that were voted off from Round Three Poll: Cora, Henry Sr., Kathryn, and Sidney. I only made icons for two of them.
Five Icons for Cora

We had to make something for the characters that were voted off from Round Two Poll: Grumpy, Ingrid, King George, and Ursula. I only made icons for two of them.
Five Grumpy Icons

These drabbles were written for Challenge #13 - Lightning Round over on

writerverse, in which we had four days to write up to five drabbles of 100 words (+/- 5 words). Instead of posting each one as a difference post, I've posted them together. Each one is under its own cut. Please check the header for info about each one.

Title: A Simple Gift
Word Count: 105
Rating: G
Original/Fandom: The Hobbit
Pairings (if any): Thorin/Bilbo
Warnings (Non-Con/Dub-Con/etc): Not really
Summary: Even a simple gift can mean a lot.

Title: Small but Mighty
Word Count: 103
Rating: G
Original/Fandom: Lord of the Rings
Pairings (if any): NA
Warnings (Non-Con/Dub-Con/etc): Nope
Summary: Gimli reminds Legolas that size doesn't always matter, most of all when it comes to hobbits. 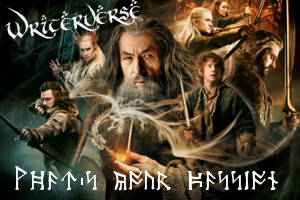 Fanfiction to original. Stories to poems.
If you have a passion for writing,

writerverse is the place for you.

Weekly prompts to full month challenges, there's something to do and lots of fun for everyone.
Please come on by and have a look around, and if you decided to sign up
please mention that

last_winterrose from Team Poetry sent you.

Title: I Can't Stary Mad
Word Count: 557
Rating: G
Original/Fandom: The Hobbit (Fix it AU)
Pairings (if any): Thorin/Bilbo
Author's Notes: This was written for Challenge 01: Quick Fic #1 for

writerverse, using the prompt Honey and Forgivness.
Warnings (Non-Con/Dub-Con/etc): Not really.
Summary: Thorin have done some stupid things but Bilbo could never stay mad at him.
~*~

Bilbo smelt the sweet smell of honey cakes the moment he entered the royal wing of Erebor and he mentally prepare himself. It was never a good sign when Thorin got him honey cakes. He didn't even give Thorin a chance to gave a greeting as he entered their room.

"What did you do?" Bilbo asked.

Thorin gave Bilbo a look as if the hobbit had wounded him in some way, but Bilbo wasn't falling for it and crossed his arms waiting for an answer.

Thorin slowly glanced towards the fireplace.

Bilbo followed Thorin's line of sight and was filled with anger as he saw the remains of a vase on the table next to the fireplace. He knew at once what it had been and turned on Thorin so quick that the dwarven king even took a step back from him.

"IwasworkingonsomedocuamentsandmyquillfellunderthetableandwhenIstoodupIbumpedmyheadonthetableanditfell.I'llgetyouantherone." It came flying out of Thorin so fast that Bilbo almost had trouble hearing what he was saying but he did catch the last two words with no problems. "I'm sorry."

Bilbo shook his head and slowly walked over to the table. The vase had belong to his mother, and was one of the few things that he asked the dwarves to get when they went for his belongings, once he decided to stay with Thorin in Erebor. It had been a simple things, white with red roses running along the top of it, nothing fancy; he couldn't even remember where she had gotten it, only that she had it for as long as he could remember. He picked up a piece and looked over it, he could see some kind of glue and knew at once that Thorin had tried to fixed it but when the glue didn't work, he went for the honey cakes.

Bilbo tuned back around, he was going to yell at Thorin but when he saw the mighty King Under the Mountain standing there, looking like a child that had just been caught with his hand in the cookie jar, he couldn't stay mad at him. Yeah, the vase had belong to his mother, but he had other items that had been her's; and he remembered where those had come from, gifts from his father, a necklace that she always wore, and a blanket that she had made for him when he was younger. The vase had been pretty but it wasn't the only thing that he had to remind him of her.

He set the piece back on the table, walked over to Thorin, and gave him a quick kiss. "It's alright, as long as you didn't hurt that hard head of your when you hit the table."

Thorin seemed shocked, opening his mouth a few times as if unsure of what to say. He finally just grinned, wrapped his arms around Bilbo's waist, and pulled him closer. "Are you sure you're not upset about it?"

"I'm a little upset, but I have other, more important things from my mother. Beside, I could never stay mad at you for long. I mean, you almost threw me over the main gates and I forgave you for that." Thorin tensed at that, tightening his hold around Bilbo, but lighten it a little when Bilbo him another kiss with a smile. "Now, where are those honey cakes?"

Title: This Was Not the Plan
Word Count: 290
Rating: PG
Original/Fandom: MCU
Pairings (if any): NA
Author's Notes: This was written for the

writerverse land comm for their Challenge #23: Quick Fic #9. Using the prompts 'Control' and 'Body in the trunk', with the bonus challenge of 'not using names'.
Summary: It was suppose to be a simple mission.

He waited in the alley until his partner bought the car around to pick him up. It was taking longer than it should have and he hoped that nothing had happened to her. The mission was a bust, they had lost control of the whole thing the moment someone from both of their pastes walked into the ball room and their covers were blown. They split to make sure at least one of them had gotten out, and when he reached the alley and heard her voice through the comm to find out where he was, he didn't stop the sigh that left him, nor he stop the sigh that left him as the car finally pulled up.

Running from he hiding spot, he moved to the back of the car to throw his duffle of weapons into the trunk, not hearing her shout at him from the driver seat. He opened the trunk was in mid toss of the bag when he saw the body inside.

“JUST GET IN!” she screamed at him.

He shut the trunk and ran to the other side of the car, settling with holding his bag in his lap for then. His door wasn't even shut before she stepped on the gas and they were flying away from the alley to their pick up point.

They drove for a while before he broke the silence between them. “Was that -”

He nodded and settled with staring out the window.

They had still somehow gotten their target, not the way that they had planned but they still got him. Maybe the mission wasn't a complete burst after all.